#69: Go with instinct on this one….Saddle-up partner 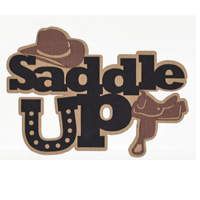 With a heel still not ready to cooperate 100%, but some weather that was, the goal for this week was begin to build some endurance on the bike using the 40-ish mile brick last Sunday as a springboard.  However, having had 7 days of training in a row, I needed to work in some recovery as well to avoid ramping up too fast.


Monday – ride: I decided to push it a bit through Monday mostly because I had the time and the weather was going to work.  I got a solid swim session in and was able to get another 37+ ride in on a hilly course but at a relatively easy pace.  I felt good about this, but if there was any question about needing recovery going-in, there was no question remaining…..I needed it.


Tuesday – off: was a planned off day……ahhh……planned off days are the best.  Sort of hard to follow-through with this time b/c the weather was really nice again…..but I knew my legs needed the break and so I took the day completely off.


Wednesday – off? Had a bit of a hiccup on Wed b/c with busy family schedules, that became a day off as well…..not great b/c I likely need the the training time, but I pledged to make up for it the remaining week and hit the weekend hard and my body was happy to have some extra sleep time.


Thursday – Hilly Run: Having recently moved, Lindsay and I are having to recalibrate our standard running routes some, which is a good thing b/c it keeps it interesting “I found a new X miler” or “If you go out to Y and back it’s almost exactly * miles”……yes, this is the kind of nerdy conversation that we share……he says as he hangs his head in acceptance of the realization of what he has become.  🙂 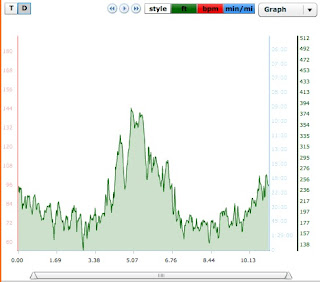 ANYWAY….I decided on Thursday it was time to test the heel a little and build up the mileage on the run.  The previous week I had done 2 x 4-ish miles and felt pretty good and the heel was responding nicely, so figured it was time to go for a little slow and steady.   So I figured I’d go out and get some miles in and find a 10-12 mile route.  It turned out to be mostly out and back with a climb at the mid-point…..if that looks like something less than fun….it was indeed.


I went out really easy, and the heel was cranky as expected.  I figured it would loosen up around mile 2, it did, sort of and I kept moving easy reminding myself that slow was the trade off for miles today b/c the heel couldn’t really handle long and intense. Somewhere around mile 2 the route started doing the up 2, down 1 thing which can be a beating.  It kept this up until roughly the turn (mile 5.5) and then it started the up 1 down 2 on the way back.  A little 1 mile climb back home and 11 miles of smackdown in the books.  Retrospectively, this may not have been the best choice, heel and knees were chatty by the end…..but I was happy to have the miles and the hill work in….


Friday Swim & Strength: The heel needed a break and I had a big bike planned for Saturday so it was to the pool and a follow-up stretch & strengthen session @BC31.  Both were solid sessions and the stretching and core work felt really good on my legs.  I always leave a stretch session telling myself I need more of those…..even PTs need to stretch more!


Saturday – 2 loops
Saturday was to be the “big” day and the plan was to complete 2 x 22 mile loops.  Part of the reason for the loops is to work on the skill of staying mentally focused.  Most triathlon race courses are 2 loop courses (at least) and I find that there is real potential for me to have somewhat of a let-down on the second loop, so this year I’m going in with that as a skill on my “to improve” list.  The second reason for the 2 loops is that I was picking up a co-rider (thank Eric) for the second loop.  It’s a nice break to have another person along with you…..it’s a double edged sword of course……on one side, there will not be a person along w/me on raceday…..so, like the uplift of an iPod on the run, I can’t get used to it; on the other hand, it’s a great distractor from the discomfort and lets me push a little bit more as I now have some fresh legs to gauge myself against.  Well, the 2x22mi loops actually turned out to be 1×24 and 1×28….so a bit longer than I had originally planned, but it’s always a good benchmark to get over the fifty mile mark.  Due to the less than stellar road surfaces in some sections of my area I decided to alter the route and opt for chipseal over potholes big enough to swallow me up.


Editorial Comment – OK, they’re downright dreadful in places which really pisses me off when I consider the amount of taxes we pay in NJ….not to mention the nearly non-existant shoulder and drivers who will NOT share the road…..not exactly a super inviting environment for those looking to ditch their petroleum addiction….or their body fat for that matter…..BUT….I digress


I was saying?  Oh yeah, so after some route modifications, 44 miles became 52 and that nixed the time I had aside to make it a brick…..kid #2 soccer game after all.  It was probably better, my legs were pretty fried……and I was feeling pretty good about it (until of course I saw Lance Armstrong’s tweet that he did 120 in Hawaii…..can you say #knocked_down_a_peg ?….ok, that was lame twitter humor)


And so, I made it to Sunday and the goal was to get in a longer swim and a shorter run…..after doing a little “Julie and Kristen spotting” by watching a little bit of the NYRR NYC 1/2 Marathon on TV.  Another amazing race by NYRR btw……they do a great job.  Not to mention these 2 speedsters…..amazing!


When I got to the pool I was quickly turned around…..swim meet until 1230P.  Bummer….suppose I should have checked before I went…..another thing to think about….so I got back and put in an easy 4 miles.  The heel felt pretty good and I diligently iced afterward.  1/2 hour later I was back out the door for the swim, which was to be +/- 2500 meters of endurance swimming (up/down the ladder 250, 500, 1000, 500, 250).  Felt pretty good and my pace was reasonable which left me just enough time to get back grab the kids and head to practice……


After dinner, bath, teeth and stories, I sit here finishing my blog for the week.


Time: 10.25 hours of training this week, 5 in the saddle, which isn’t bad, although taking Wed off unexpectedly hurt some as I was hoping to be closer to 15 than 10 hours in total; but they were challenging sessions, more intense than I had figured on, so it was a solid effort.


Distance: 106 miles, nearly 90 on the bike, which needs to come up some.  I figure I’m at week 3 w/the heel issue, so as much as 9 more weeks to contend with this.  Not my favorite thought, but the more realistic I am the better.


Focus: Feeling good here.  Over the initial hump and starting to get more in tune.  Good weather certainly helps here.


Pain: The heel is manageable…..but it’s not where I want it obviously.  My hips are tight and my knees are a little cranky….but this is about what I expect at this point.


Nutrition:  Starting to lean out…..and for good reason…..I burned an estimated 8,200 calories this week in training…..so I need to be careful here.  I want to slowly bring myself down to race weight….but not crash and burn.  Likely need to increase the dietary protein.


Hydration: Fair here…….been a focal point and it helps, although I’m not getting enough in during actual training.  I was pretty dry after the riding miles.


WHERE DO I GO FROM HERE?


This coming week is going to be more of the same…..

A little sore, but back in the saddle nonetheless,
Mike E.