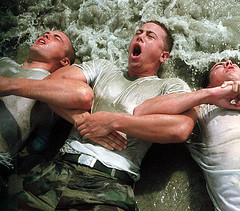 This week was slated to be the biggest, baddest, and most difficult week of the training season; the first of two weeks of “over training” – the kind name endurance athletes use for the blaring wake up call to those final few fibers of muscle and connective tissue that aren’t currently being used to get to attention and fall in line.  Hell week for tired muscles.


Monday started solid – 2:36 minutes of cycling, with 2 hill sections and a hard flat section where I emphasized pace.  The session went well……but I was darn tired when I wrapped up with those last few hills…..so the week was well underway.


Tuesday things started still on track – 40 minutes of high cadence cycling followed later that day with a goal for a long run……except…….the environment decided it wasn’t so enthused to play along.  I stepped outside late in the afternoon figuring I’d run for 2+ hours – it was 97 degrees and the humidity left the air thick (heat index = 102).  Well, I figured, the race will be super hot too, so why not just give it a go?  And I did.  My plan was do 4 mile out and back x 2……and the first four miles went pretty decently…..but I could feel the heat.  It sounds sort of stupid looking back, mostly b/c either is pretty crazy from training purposes, but I can distinctly remember thinking to myself, man, the gap between 95 and 102 is pretty wide…..pretty big difference really.  I hit the turn and went about another mile before the heat really started to win the battle…….it was like running in a furnace…..the wind, although there, was so hot it actually made it harder to breathe and made me feel hotter not cooler.  YUK.  By mile 6 I was reconciling to myself that perhaps 10 more at this temperature wasn’t going to be a huge help for me……and by 7, I was overheating enough to be forced into a walk.


There’s an internal battle that goes on during training sessions where this occurs……I’m sort of pissed at myself because I feel like I’m wimping out somehow; even though I know better……it’s simple physiology really, when the body temperature gets high “enough” (whatever that is), you will slow down…..or…..you will stop.  So I opted for slowing down.  After a minute or so, I was back on the jog for mile 8.  When I got back to the base of the driveway, I came to the conclusion that to gut out another 10 miles would be a disaster…..and really any additional miles would probably not be super helpful for me…..so I cashed in my chips on the day and moved on. 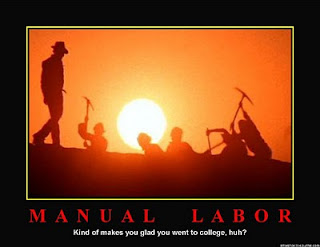 Wednesday I decided I’d make the emphasis cross training to give my legs a chance to freshen up some…..and after 2 hours of labor (“landscaping duty”) in the somehow even hotter temps than the day before (105 heat index), I completed a session with one of the trainers at Pro-Activity emphasizing strength and power……where I proved to myself exactly how weak endurance training has made me…….very…..confirmed by soreness…..lots and lots of soreness.


Thursday it was back on the bike for a double session – 12 miles of hill repeats and then a 25 mile “rolling” ride with some of the group of cyclists that ride out of BaseCamp31. Both were good sessions and felt the day was a success.


Friday I was back in the gym for some lunges and squats (OK, many). With only my arms were feeling stupidly sore, I would never want my legs to feel slighted….mission accomplished.  Great session that I think helped me with the goal of waking up the remaining glutes…..all awake now.  I did a slow shake out 5K afterward knowing that the next day I’d be sitting in the car for many hours getting stiff and sore.


Saturday – well – many hours in the car getting stiff and sore.  We packed up the kids and headed south for some R&R in the Outer Banks of NC…..sort of.  I had previously decided that mine would be a “train-cation” where I’d spend a good chunk of my time (as in the hours I’d normally be working) training.  Seems like a good plan right?  Definitely a plan I questioned as we made our way through torrential downpours only to sit in a few hours of traffic waiting to get over the final bridge.   Well, plenty of time to get stiff.

This AM (Sunday), after looking at my training log and noticing that I had achieved the intensity, but not the volume I was looking for, I decided this was the best opportunity I had for my last long-run of the season…….minimum 15 and possibly up to 20 depending on how I was feeling.  I headed down Route 12 that goes through the Cape Hatteras state park, essentially a high-speed 2 lane county road with minimal shoulders……but there was no standing water from the rain…..so that was nice.  My plan was to go out 5 miles, turn toward home for a water stop and then do it again (potentially).  The first few miles went pretty well…..at a pace I was happy with.  However, this was definitely more than just another long slow run……with the humidity in the air and the steam coming up from the quickly heating asphalt coupled with the long & straight road with NOTHING to see in either direction but marshy brush this run was quickly becoming a sensory deprivation experiment…….just the kind of test I love……for a little while anyway.  By the mile 5 turn I was drenched with sweat both shirt and shorts and knew this was going to be draining.  I made the turn and headed back toward the house still running at a decent pace…….nothing beyond the boring so I found myself focusing on my cadence and breathing.  5 more miles down and I was back at the house…..for the moment of truth.  I took a good long pull from my water bottle and let the thought of stopping right then and there creep into my head.  Nope……get moving.  I put the bottle down and headed back out for round 2.  I told myself that I’d do 3 out, which would make the run 16 by the end…..but when I got to the 3 mile mark, I found myself thinking “you’re good for another 1, get to mile 4″……..and I kept chugging.  4 must have come and gone without me hearing the beep of the mile split on my watch as when I looked down I noticed that I was at 4.4 mi.  “Oh well, might as well go to THE (there was 1) intersection”….got there and the watch was telling me I was at 4.9, so why not get the .1 so I could make it an even 20 miles on the day right?  So I did.  By that point I was beginning to hurt though and I knew the final 5 back home was not going to be much fun……I took my “wick” style shirt off and wrung it out.  With a loud SPLASH the pavement looked like someone dumped a 20 oz cup out……and I trudged along…..in some pain.  My quads and glutes (still very sore from Friday’s workout) had had enough.


The next 5 miles were me bargaining with myself.  “C’mon, run 1 mile and walk a tenth…..you can do that…..It’s only 5 miles.”  And, even though it was a really crappy 5 miles of overheat and slower than usual pace……I eventually got there……and the relief of having my last long run in the books was nice.  A few hours later (as I sit here) the legs are feeling near recovered and I’m planning out the next several days of train-cation…..the last big week.


Wastin’ away in Margaritaville,