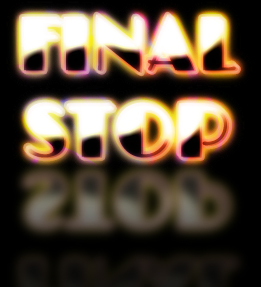 Somehow last week got ahead of me.  I woke up Monday AM and realized “yesterday was Sunday” and I never wrote my blog….doh!  It’s funny how twisted my brain gets when my calendar is thrown off.  Thursday Thanksgiving and the ensuing long weekend was enough to totally mess me up…….so my apologies to all of you who wrote emails to me to relay the stories of how, like a butterfly flapping its wings in another part of the world, your entire week was thrown into a hurricane with my lack of blogging, I am truly sorry.


OK, so there were none of those emails…..but I press-on.


If you HAVE been reading along (and BTW, thanks, I’m over 4500 reads, more than double my goal for this blog) you know that I’m coming up on the final stop of what has changed from my attempt to achieve the “Red-iculous” to one related more closely associated with an “attempt for Red-emption” for 2011……


Of course, the actual tour will continue until 8/12/12 when I’m hoping to be getting the better of an ultra-distance-triathlon and achieving the “Red-iculous”……but since May of this past year, when my first attempt at Ironman didn’t pan out exactly the way I wanted it to (as in swim – bike – crash & burn – trudge), I’ve been committed to getting more serious and going back and besting those events (or distances) that have gotten the better of me in my (now 3 year old) endurance racing career.

So where does that put me now?
Well, the tour is certainly not over.  The 3 “bigger” events are still to come.  The marathon, which I’ve yet to have a race that I’ve felt good about, is less than 1 week away.  My first marathon was OK, but sort of an environmental disaster.  Super cold (25 deg) day making for a long, lonely run.  Missed my goal by 17 minutes.  I followed that up with a second attempt 6 weeks later (generally a bad idea) and found a course that wasn’t exactly setup for personal bests (narrow, lots of people, etc)……managed to do worse.   Followed THAT up with a super hot, dehydrated attempt in Utah as part of Ironman and did even worse.  Not exactly the trend one might hope for.  This is leaving me a little nervous because I know I’m in a ton better shape, and now have several races under my belt (the first marathon was my first race ever so I didn’t really know what to expect), but I also know I’m going to have to stay patient and run a smart race….oh and there’s this little hip thing.


Well a lot has happened over the last two weeks, so here’s the cliff-notes version:

Seem a little all over the place?  A little perhaps, but that’s only by normal-person standards….. 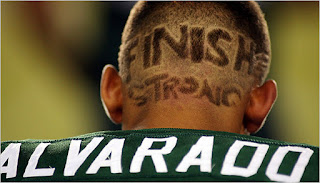 It’s finals-week:  What’s in is in, so there’s no sense in trying to “add to” my fitness.  My focus needs to be on making sure I’m doing the right things for the hip and (starting Wed-ish) packing myself full of carbs.


I also need to make sure I’m deciding on a race strategy (including nutrition strategy) that I can stick with.  Right now it’s looking like a start easy, build the pace for a while and hold-on approach might make the most sense.  I’m fully expecting the hip to fatigue and then start barking so a slow first half and then making up time in the second 1/2 (aka negative split) is likely off the table……however pushing too hard early on is only going to bring on the point of fatigue that much faster……much to think about.


I’ve been doing a lot of “tempo” work in my training which is sort of a warm-up, speed-up, cool-down approach so that has some comfort in it, however I think the key above all keys is going to be NOT to obsess about my pace and rather dial-in to my perceived exertion.  This will keep me from focusing on my own mental barriers for pace and also prevent me from stressing too much too early.  I guess if I get all of the stress out now, maybe I’ll just “let go” next Saturday.


Hope to have a great story to tell next week, how everything went perfect and on my way to serious redemption, I ran a great race….but no matter what, I hope to relate that when I find myself in that trying, difficult part of the race, regardless of mile-marker that I will push on and find a way……because no matter what your circumstance, finishing strong is a choice.  Don’t believe me?  Watch the video below!