This week has been a wild ride.  It shouldn’t have been really…..my training schedule had lightened up some to allow my body to catch up prior to the Amica Ironman 70.3 in Providence, RI we had a short week professionally due to the Independence Day holiday and because the holiday was mid-week and that throws many a schedule off, I was able to plan in an office day……sort of luxurious by my standards. 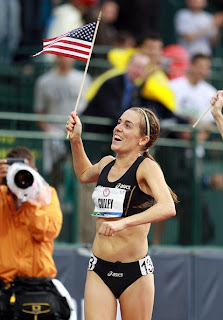 But then there was this other thing…..our friend and Pro-Activity co-worker (trainer/coach) Julie Culley did something sort of impressive….as in super-extraordinary crazy, nutty impressive……she out-kicked an American record holder to not only meet her goal and make the US Olympic team, but to “come out of nowhere” (of course we know better) and WIN the 5K US Trials in Eugene, Oregon.  Freaking Red-iculous.  Well clearly, this kind of thing deserves a little send-off….which if you know us, you know that we RARELY are satisfied with small and relaxed.  So….we decided to try to make it really special for her…..and after a week of planning and crazy ideas we decided that with some work, we could make it cool.  That translated into a quaint gathering of 250+ members of our community, music, food, autographs, good luck wishes, pictures, etc. (If there was only enough time to arrange for her to arrive on an elephant DARN!).  The only hitch (for me) was that I had this other little thing going on that same morning nearly 5 hours away in Providence.  But if I raced well and timed it just right, I MIGHT be able to get back for some of the festivities…..game on.


Amica Ironman 70.3 Providence – Welcome to Summer School
So I got a few easier sessions in and let my body recover enough to race well.  Not tip-top, but well enough.  I hydrated, carb-ed and was ready to go….and as the alarm went off (+/- 3A) I reminded myself, as I sometimes have to, that I was CHOOSING to do this.  Pre-race proceeded as planned although I found myself surprisingly chilly prior to the swim start (no wetsuits and I think the water was warmer than the air).  Finally my wave was called and 3-2-1…..we were off……


I started pretty well and for the first few hundred meters (+/- 10-20%) I felt on track for a good day.  I felt my pace slow some (pretty typical) and felt a pack of swimmers coming up on me.  This is a little odd b/c usually by then the slipstream has formed……it was at that point that one of the wheels fell off.  My goggles got bumped and filled with water…..annoying, but no biggie.  I reset and pulled a little to the side but from that point on, I COULD NOT sight a straight line.  I was all over the place and it seemed like every time I picked my head up I was way off course.  At one point I had to be redirected by a kayaker…..”you’ve got to go R, you’re going hit the rocks”…..and sure enough, when I put my feet down, there they were……and the day sort of went like that for a while.

After weaving back and forth, I finally got out of the water, completing (time-wise) the worst swim I have had in a Triathlon (somewhere around 11 sec per 100m off my last effort or 3.5 minutes off my predicted).  Doesn’t sound like much, but racing nearly 10% slower is a pretty big swing.  Knowing that I pretty much SUCKED in the swim, I tried to hurry through the run from water to transition, get my things on and GO…. 3:04 later I was on the bike….could have been faster, but not terrible.  As I rode out of the park, I realized that my Garmin was not working……and not entirely ready to NOT have my cadence and heart rate in front of my face, I started to fiddle.  I eventually realized it was “frozen” at 3:24 AM……the time when I took it off the AC power source that AM.  CRAP!  Not super easy to reboot your watch while riding, but it started back up…..”OK, now settle in”…..and I did for the next 25-ish miles…..when……I slowed to go through the water stop and had a pretty terrible exchange with the volunteer.  I don’t really know how it went wrong…..but having seen a bottle get dropped just before I got there, I’m thinking the volunteer didn’t want to let another one slip and decided to hold it a bit more securely.  MISSION accomplished.  I grabbed for the bottle and it sort-of felt like she didn’t let go.  My arm jerked backward just enough to yank my front wheel off center.  ABORT! Or so I tried, but when I went back to right myself, there was no correcting…..wheel cut sharply L and KA-BOOM!  Over the top.  I was…..how shall we say…..not so happy?

ME: (yelling): “SON-OF-A-EXPLETIVE” getting up examining the fallout and noticing my knees, elbows and L shoulder were starting to bleed some and feeling both shoulder blades and my R hip talking back.
ME: (yelling) “BLEEP” looking across the road to the completely slack-jawed (literally mouths hanging open) volunteers
ME: “Am I OK?”……
Volunteers: no response…….mouths hanging open
ME: (now yelling again) “Am I OK, someone talk to me”
Brave Kid: “Do you feel OK?”…..
ME: (thinking but not saying) “WTF kind of bull-expletive question is that?” (OK, not exactly the help I was looking for)……
ME: (getting more angry and yelling) “AM I BLEEDING Profusely anywhere…..are there bones sticking out anywhere?”
Levelheaded Adult Woman…..”No….just road-rash….I think you’re OK”…..
ME: (thinking while mounting my bike): “Thank GOD for you level-headed woman”
ME: (saying) “thanks”……and off I went.


Yeah…..so that was the sort of day I was having….Awesome.  Get it all out of the system now right?  Or something.  But from a pacing perspective, the ride was going relatively well….my heart rate was under control and I was working, but not burning up in the heat……I thought about the need to respect that I now had exactly ZERO calories (about 600 less than I would’ve used) and ZERO water (about 25-30 oz less than I would’ve used) to make it to the next water stop……


And yet, we press on
The bike leg finished without further incident and looking back, I was almost at my goal pace of >21 mph (20.9)…..so considering my little snafu and unintended caloric-restriction, I was feeling decent.  Tried to speed through transition 2 to make up a little more time and got to the sunscreen volunteers…… sun-baked road rash not being the delicacy you might imagine, I opted for some.


ME: “Great, I’ll take some…..but please be careful for the…..Yeee-ooow (feeling the sting of the sunscreen in the open cut on my shoulder blade)….”
Volunteer:  “Oh” (realizing what he just did) “road-rash…..I’m so sorry”
ME: “No sweat…thanks”…..and off I ran.


The Mental Game
The first 2 miles of the run course were straight up a pretty decent hill. clearly meant to break you mentally…..and it almost did.  I got about 60% to the top and started seriously questioning if I could run today…..my pace slowed pretty quickly and I started to feel the miles without fuel or water……”it’s only 13 miles” I thought……”you’ve done worse” and so I trudged up the hill making it to a water stop.  I grabbed some cold sponges and stuffed them in my shirt, slugged back some flat Cola (there IS a use for this mix of sugar-salt and other generally terrible things……just not as a daily regimen) and felt a little better.  I grabbed a couple of handfuls of ice just to hold and try to stay as cool as possible…..and by the mile 3 turn, I was feeling a little more upbeat. I found my legs and started to run more my pace…..my heart rate was elevated, but not crazy and the cola and ice was helping.  I avoided the GU pack in my pocket figuring I was too dehydrated and I wouldn’t have enough water to process the carb-shot…..and just kept moving.  By the 6.5 mi turn (i.e. second loop) I was starting to feel decent and I knew if I could get over that hill once more, the hard part was over…..I got to mile 10 (over the hill) feeling good and now had only one more tough section to go (hot, exposed, quiet stretch b/t 11 and 12.5)……slowed a little but went target to target finding people to pass…..and then finally got to the shoot where I heard a big


“Congrats to Michael ELLs-heart, number 617” from the announcer.


“Whatever” I thought……I don’t know why these guys butcher Eisenhart so much…..but it didn’t matter…..I was ready to collect my gear and beat it back to Jersey to catch the Culley-extravaganza. My time of 5:07:33 earned me #20 of 141 in my age-group and 115th overall of around 1100….. I was hoping for sub-5 hours….but overall, given the day’s events, I was pretty happy with the finish and hopeful I can add just a bit more for the next race (30 days).

With the exception of needing to stop and stretch my (now stiffening) legs, 5-ish (weekend traffic) hour car ride home left me feeling about as good as 5 hours hard exercise and skin removal followed by 5 hours of sitting in a car can leave you feeling…..but I made it to the party.  Really, really awesome showing.  More than 250 people, a proclamation by the Mayor, a really cool video that Eric created (below) and AMAZING job by the whole team and their families as well as some of our closest clients (who we had to recruit to help) refreshing food and drink, giving out “In Pursuit” T-shirts for anyone willing to set a personal goal, an absolute CHAMP in Julie signing autographs and taking pictures and hustling their asses off to make the day remarkable for everyone involved and something that will (hopefully) help Julie find that extra gear in London.  So cool.


Yes……this has been a really wild week…….and after a few days to RECOVER…..it’s back to work.


ME: “You probably didn’t have the time to read this far……”
YOU: “CRAP…..you got me….I should have NEVER read this RED-iculously long blog…I’ve got a lot to do and now I’m late”
ME: (winking) “Bye”,