There are hopeful expectations and then there’s reality.  Sometimes those two things come together at the same time and place, however it’s pretty rare….at least in my life it seems to work out that way.  If life is a slow steady march up the stairs to heaven, I’m pretty sure that the person climbing them just ahead of me is quite the prankster.  A few marbles to step on here or there, the occasional Indiana Jones step (where your foot goes all the way through) and my perennial favoriate the grease on the rail trick leaving the unsuspecting climber on their face for a minute……yeah, it’s like that, never easy (and never particularly pretty) but is generally forward-upward movement…..and I’m learning…..


This week was a trap on the staircase……either that or as I slept last Sunday night all snuggled in my bed, the chaos-monkey (if this isn’t one of those old life characters, like the Easter Bunny, Tooth Fairy, etc it should be) crept into my iPhone and started really screwing with my calendar for the week.  That mean-spirited little sucker managed to put something on my calendar for just about every night of the week and when there wasn’t something, something crazy and random was inserted just to keep me on my toes.


Monday – Advantage Mike (1-0): the monkey was still sleeping apparently and I was able to get a swim AND recovery ride in…blissful.


Tuesday – Push (1-0): the monkey was stirring, two of my children were to perform in a piano recital that evening (which was really very good and WAY more than just piano, it was a legit concert w/guitars, singing, harp, drums, etc) but I was generally in need of a day off, so after 30 minutes of swimming, I was done for the day…..equally blissful.

Wednesday – Advantage Monkey (1-1): I got back from work and needed to get out on the bike and the plan was to run off the bike all in time to pick up my children and take them to the local summer festival at our local church.  About 15 miles into my ride (Alexandria Township, NJ) I heard a very strange wooshing sound from the wheat field (or some type of grass/grain) on my right…..sort of like a mini-helicopter……and about 10 yards in front of me out bolts a deer.  When I say bolts, I almost can’t describe it….deer (we have MANY of them) sort of jump through the fields usually….and given their speed, even when being chased (by a dog for example, they usually quickly accelerate and then bound again).  This one was on a flat-out sprint, like nothing I’ve seen before.  Ears were literally pinned back and it was running more like a horse coming down the backstretch.  Sounds crazy, but it almost had a scared look (chased by chaos monkey?)……it ran across the road so fast that when it it the brush and thicket on the other side it literally bounced off and then scrambled sideways, found a hole and took off again.  Out loud as I craned my neck, I mumbled “what the F was that?” and kept riding.  There’ve been a few articles about Mountain Lions in our area…..including an image taken by a hunter’s auto-camera that is blurry but sure looks like something big.  They are of course being brushed off by most experts……but that’s what kept popping into my head……what would chase a deer enough to get it going like that?  Anyway, I kept going.  A few miles later (now 18-ish in and a solid 12 from home) I heard another sound….something far more recognizable…..the rhythmical rubbing of a tire out of “true”.  I got off to assess the situation and it wasn’t good.  The tire itself was worn almost completely through (fibers exposed) and I knew it wouldn’t be long before the tube blew.  I called Lindsay (who was already at the festival volunteering and so out of the loop) and as I crept along I got a call from my brother-in-law Jeff, who also cycles and I’m sure could feel my pain, offering to pick me up.  “I’ll see how far I can make it” I said….but kept the pace slow so I wouldn’t lose control.  A couple miles further and “BANG” goes the chaos monkey. CRAP!  Thanks to Jeff, I didn’t have to walk 6 miles in bike shoes…..by the time I got back, it was a wash.  To the festival.


Friday – Advantage Monkey (2-2): still waiting for the wheel, I decided to take out the road-bike that I had loaned to my brother.  A minor seat adjustment and it was in business.  Not ideal, and certainly a different feel (from TT bike to road bike, is a bit of a switch), but all was well…..I would make up for some of my lost time (and miles).  Until……CHAOS Monkey.  A few drips and drops, some rumbling and then a text “Are you OK?  Should someone come pick you up?”.  It hadn’t started raining by me, but apparently only a few miles South (BaseCamp31) it was pouring.  After talking it through with Lindsay and seeing a big flash of lightning, I decided to head back……18 miles.  Ugh!


Saturday – Advantage Monkey (2-3): Hoping for the best (and another 100 miles on the bike) the Chaos monkey hit me again.  Turns out the soccer tourney for kid #1 (1.5 hours away) was going to start SMACK in the middle of the day.  Aaaaaarrrrh!  So, 100 miles heat acclimatization became 55 miles with an early AM start. 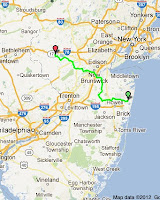 Sunday – Advantage Mike (3-3): Back to the soccer tourney, but I came prepared…..bike on the rack and the plan to ride back home (+/- 75 miles) and run off the bike (10K).  Despite not knowing where I was going, riding through a few neighborhoods where it seemed like they had never seen a cyclist before (a little unnerving), and some roads that felt like a washboard on my butt, I made it unscathed, from Neptune, NJ to Hunterdon, unsupported.  I was pretty beat (and a little dehydrated) when I got back home, but I managed a 10K on my “hilly route” at what I would consider slightly better than race-pace.  So a successful day.


Overall, the week turned out OK.

Where from here?
This week is a (welcomed with open arms) step back on the total volume as I begin to prep for half ironman on 7/8 in Providence and let my legs refresh a little.  I’ll have some harder (intensity) sessions and need to get 4 sessions in the pool, but I’ll flip a long-run for a track session and my mid week rides for some intervals or a tempo ride.
All said, I think I’m on track generally.  It’s a little tough to tell right now, because I’ve been pushing pretty hard the last couple weeks (consciously) and am feeling the effects…..aches and bumps and bruises……so I’ll reevaluate when I’m feeling a little more fresh….but overall, my paces and session-stats are pretty good, nutrition is coming along nicely and body is holding up.
When you see him, tell the monkey I said Hi,
Mike E.