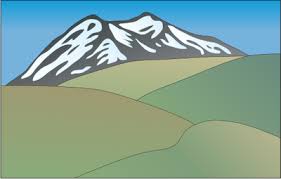 Why do we do what we do?  Why do we voluntarily put ourselves into situations that we know are beyond our abilities……

The last few weeks have been a series of foothills for me.  On the one hand, they’ve felt a lot like speedbumps, but when I step back and look, they’re really foothills, which are challenging, but more than anything, a sign of the real climbing that is about to come and although I’ve been terrible at maintaining even a shred of what I’d call a regular blog,  I realize events of late have been part of my greater-REDiculous effort; not the endurance-training specifically, although there’s been some of that, but the idea that great achievement comes from a sustained effort.  I was at an annual “meeting of the minds” this weekend, my third annual, where some of the bright-bulbs in my field (and somehow me) come together to debate and connect and push ideas forward.  At one moment someone brought up the old Bill Clinton (internal) phrase used on the 1992 campaign trail “the economy stupid” (coined by James Carville)…..and when I started thinking about where things have been for me and where I think I’m going, I keep thinking “it’s about the growth stupid”……because that’s what the REDiculous Effort is it supposed to ensure……a long focused effort to yield amazing growth and extraordinary experiences along the way with endurance racing as the “easy” experiment.

So about those foothills:

So although I’ve not had the chance to blog nearly as much as I want to, nor train as hard or long as I want to, nor get everything done that I’ve wanted to……the effort so far has prepared me for a wild ride…..and the last few weeks have been wild.  Seems like the real challenging stuff is yet to come……hope to be ready.
It’s about the growth,
Mike E.