Today I learned one of the toughest lessons in sport, something that I knew was coming, but never really anticipated would be quite like it was……..something that I don’t think I was 100% ready for.  Today, I sent my youngest to the wolves a little bit and then had to stand back and see how he would survive.

Today I learned that “sometimes it’s harder to NOT do than it is to do”.

For years my youngest child (and only son) and I have “wrestled”.  It’s something my brothers and I spent a solid portion of our athletic-years dedicated to and had some (relative) success at……so with some knowledge of the sport, I knew what was coming as I signed up my little guy for his very first “novice” tourney.  Novice tourneys are pretty relative themselves, generally meaning 1 or 2 (but sometimes 3) years of competition-experience.  Andrew (“bubby”) however……well, it was his very first attempt in any capacity.  Sure he’s rolled around with me and his uncles and cousins, but unfortunately no formal instruction and (more unfortunately) no competition against other athletes his size/age/experience level; Although he has a pretty good concept of the basics, well, I wasn’t expecting it to be real pretty……and unfortunately, it lived up to the billing. 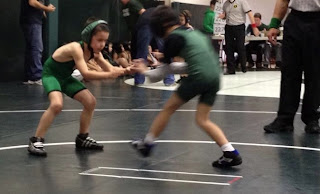 However what was absolutely inspiring to me was how hard he worked and how much fight he brought to it.  With his lack of tested-skills apparent to anyone who knew the sport he was easy prey……however he just kept coming and fought each time until the whistle.  Tossed to his back?  He’d find a way to roll to his belly.  Flattened with a hard shot?  He went right back to the work of getting up and out……and although I was sad a little for him as he came to the side after a rough day asking me why the other boys “were so hard on me (him)”……I was proud that he was gutsy enough to not give up.

Admittedly, the thought of getting him a bike and some swimming lessons crossed my mind………but there is something so great in there………the self reliance required to be out there by yourself…….the toughness required to pick yourself up again and again and again if needed that I think this is the very root of success . To just keep working the problem, no matter how exhausted or how insurmountable it seems is to see life as the challenge it is.

I have so many conversations with people, whether professionally or more personally that seem to simply come down to the willingness to put forth effort……..where the “winner” (in the long run) is a simple question of who will keep at it longer……who won’t give up first.

I’m not sure Andrew learned much today beyond how bad an injury to your pride can hurt…..but I learned something far more valuable as my own training plan begins to take shape: if a 5 year old can find a way to bring a Red-iculous effort, I should be able to as well.  Just keep working.