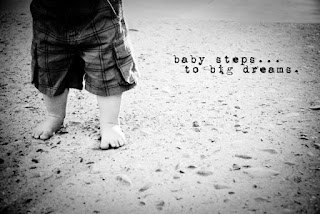 I love incremental progress…..it’s arguably one of the most important forces in my life……being a guy with pretty lofty goals in general, and more specific to this blog, RED-iculous goals in triathlon, it keeps me focused on the long term, and yet adds fuel to the motivational fire required to stay after it.  Being a generally inpatient person, it has tempered me enough to not feel the frustration of not getting “there” fast enough, and yet, at the same time, not allowed me to sink into the despair of not knowing when I’ll be “there” at all.

The good news on this front is that most of the research on great achievements (and the people who own them) makes it very clear that a continuous and deliberate, stubborn and almost fanatical focus on making incremental progress in the areas of need (often referred to as “limiters” in endurance sports) is a habit that heavily weighs the odds in your favor.  Whew!  That’s great news…..not only because it gives me something clear which I can point my more obvious neuroses toward, but rather, because it says I’m eventually going to get there if I just keep at it long enough……yes.

So this week I got back in the saddle, back in the pool and even (to the dismay of my R achilles) got two short runs in.  5 of the last 7 days making small investments of time and effort.  Nothing special really, but started putting some energy back into building the routine and happy about doing it.  It even included a trail run today, which was really enjoyable (I’ve thrown my name in as a member of a 50 miler in the Spring), at least until I realized that I had a nice chunk of eye-bark to remove.  Out now, and, not-so-surprisingly, not blinking nearly as much!

I’m still not (mentally) ready to sit down and pour over the details to determine my exact plan for the next 6-12 months….but that won’t matter a ton for the next few weeks.

To momentum and beyond!