When I wrapped up the first half of #52, I was standing in the lobby at an internet kiosk in downtown DC as my weary post-marathon passengers patiently looked on.  Being the weekend’s chauffeur they extended me a few minutes of extra patience as I finished typing……but I could tell they were ready to hit the road.


So where were we?


Friday after cutting out of BaseCamp31 a little early we packed the truckster and piled 4 adults and 2 kids in for the 4-5 hour trip to DC.


It likely should have been 3 kids, but we left #1 home with the “grands” to support her team’s bid at taking over sole possession of first place on the soccer front.  This was a really hard decision for her:  go watch Mom’s big race vs. help my team.  I was glad to see her struggle with it a little.  Not because I like to see the 10-year-old wrestle with a very mature decision, but because she genuinely cared about both and could only pick one……maybe a bit mature for 10, but she’s no average 10 year old (OK, that might be a bit of proud-Dad sentiment sneaking in).


Anyway, we hit the road and the trip was, thankfully, mostly uneventful except for the weather reports that said a major storm system was heading toward home, with significant wet-heavy-snow and plummeting temps.


By Saturday AM (with soccer game 1 of 2 cancelled), I started to feel guilty about her being up there and started to trade emails to find out what the likelihood of game 2 (the more important of the 2) happening……and if not, I was seriously contemplating the 9 hours of a trip through sleet & snow to/from NJ to/from DC so she could be there for the race.  This would have been tough….but that’s what pinball-dad’s do right?

We headed out to the race expo, and not knowing the DC roadway setup, we took an unofficial tour of Downtown.  Amazing how much more you appreciate it when you’re an adult.  I think schools should nix field trips for kids……get them a bouncy house or those therapeutic foam things to beat each other with……let teachers and some UN-motivated parents stay home and “chaperon” the kids while the other parents board a bus and go to places like DC. More learning would take place.


The bridge toward Arlington Cemetery gave me goosebumps with the gold statues; we debated the Washington monument’s purpose & design; we looked for Lincoln in his big chair and discussed why the Capitol building was “the hill”.  Pretty educational actually.  No doubt, a royal city by world standards, and despite my general lack of respect for the poor job that seems to get done down there lately, I was inspired.

By the time we got to the expo, the weather was crappy…..cold rain that chills you to the bone…..and I watched Lindsay starting to doubt herself and whether she “really” wanted to do this.  We got through it and made our way through the rain (and now snow) a mile down the road for pre-race dinner.  The dynamic made me think of the history of marathons…..was the purpose of the pre-race dinner only to fuel the physical? Seemed to me more like a modernized version of “sending off the warriors”.  Sort of festive, sort of nervous….after all, there was going to be pain in the morning.  We parted ways with the George Cole and family who joined us and wished them luck.


The evening went, and the AM came.  The racers were off early and after the breakfast buffet we layered up (it was COLD) and got our troop out to mile 5/8.5-ish to spot the racers.


I’d give us a C- for the loud-mouthing effort.  For whatever reason, we had a very tough time spotting our racers. Eric had already gone by the 5mi mark when we got there, but we’d catch him at 8-ish; We saw Stephanie next who was in good spirits.  A short bit after Lindsay saw us….she yelled “Mike” and I looked across the road as she passed, the kids waved ferociously; then we waited.  Eric came around mile 8 and I even managed to snap a few pictures…….and we waited……and waited…..no sign of them……and we waited……people threw their gloves at our feet as they started to get warm……and we waited.  What the?


Then another “Mike”……it was George Cole……I yelled some encouragement and got a few pictures (from the back)……and we waited.  Hmm, they should’ve been past by now……but to be sure we waited just a bit longer and then a final “Mike”….this time it was Cassy Bush, who was running for team-in-training and was in good spirits.  Again, I yelled some encouragement and we got back to the car (and eventually the hotel).  It was time to sprint-pack up our room and move our stuff down the hall (Eric finagled a later check out time) and then back to the finish line……more navigating DC, this time with multiple road closures……but we got to Arlington, somehow found a parking spot and made our way to the finish. 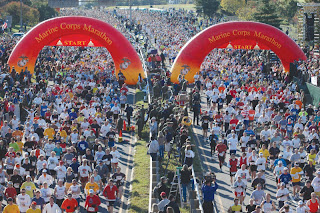 We wandered through the sea of finishers and families, me constantly reminding Lissie and Andrew to hold my hand or coat (fighting my own ever-present-worry of having them wander off) until we got to the letter “P” (as in Pro-Activity) meeting area and found a shivering Eric and Julie (coach/pace-runner for the day) who were sharing a finishers foil……if that doesn’t speak to the bond of a couple of running friends……sweaty, stinky and huddling among thousands of the other sweaty/stinky and now getting stiff, trying to stay warm.  I took off layer #1 and handed it to Julie, who with a little reverse-chivalry handed it to Eric (it was the warmer of the 2 fleeces I was wearing).  I then took off layer #2 and handed it to Julie who zipped up and headed for the Metro.  Eric fought his emotions as he told me about the race….I’m sure he’ll recap for the rest of you HERE so I’ll just say this…..the guy has an inner strength that is enviable…..and although he may not have met his ultimate goal on this particular day (still smashed his last personal best)…..I’m sure if he decides it’s worth it, he will.


We connected with Amy & family, I handed them over the now warming Eric and we (Me, Lissie, Andrew) made our way upstream through the crowd to find Lindsay who would be finishing soon.

We got to a reasonable spot and polled a few runners to see where they finished…..yikes….a full 30 minutes from finish to the end of the chute……worked out OK though, b/c that was just about the time Andrew informed me that he needed to use the bathroom.  CRAP!  Well, not actually, but we were pretty exposed so finding a tree was not an option.  We asked a Marine and he must have felt my pain, he gave me access through the roped off area to the back of the medic tent to use the porta-potties there for the now “dancing” 4-year old.  10 minutes later we made it back to our perch looking at the runners coming through the chute……had we missed her?  Would we again?  I was starting to doubt.  Then I saw her.  “Linds”….she turned and saw us.  She just about got the words “I’m so tired” out of her mouth when she choked up a little and I gave her a big hug and told her how proud of her I was.  A HUGE accomplishment….absolutely SMASHING her last effort, more than a decade ago….again, I’m certain there’ll be a good recap HERE.  Of course this was followed closely by the post-marathoners mantra “I’m NEVER doing that again”…..but I’ve heard (and said) those words before.


We reconnected with Eric/Amy, sent our regrets to Chris that we wouldn’t be able to meet Cassy at the finish b/c we were already late for our extended hotel checkout and made our way back to the hotel.


The racers showered, the kids stayed (relatively) patient and I blogged…..we left the hotel and made our way to Georgetown, pretty fun looking place, where we found some crappy-food with too much salt and then washed it down with patriotism (Sam Adams is an American Hero right?)…..we hit the road North and shortly thereafter the passengers…..all of them…..crashed and were asleep.


It was quiet and traffic flowed steadily….and although I was pretty tired by this point, it felt pretty darn good to decompress.  We eventually pulled back into BaseCamp31, saw a few of the big tree limbs downed by the storm and realized that even though this wave has crested, an equally crazy one is without-doubt starting to swell right behind it…..


Speaking of swelling, the knee is still not 100% (but it’s getting close) and I now have some snow on the ground to contend with (PLEASE PLEASE melt and get warm again) as I move into my last 4 weeks of training before Rehoboth Beach Marathon……but this is the “down-1” week…..and so while one part of life goes into recover mode, I can keep pinging on the other areas.

My inspiration, for your listening pleasure