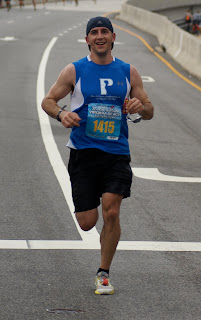 As episode #44 came to a close, I was trying to scrap together whatever training effort I could after Hurricane Irene which, for all intents, devastated portions of NJ and before our now 3rd year trekking down to Virginia Beach for the Rock-n-Roll 1/2 Marathon.  Cutting down to 2 runs a week was Not exactly the final training stretch that I had imagined…..but you get what you get and deal with it.

So on Friday, after we spent the week welcoming some new project staff, continuing to put the next steps on the OhFar & Harvest Festival (which is coming together nicely into fun party, I hope you’ll join us), sent the older kids for their first days of school and took the little man for a tour of his first-ever classroom, we put the kids in the car and headed south through the busiest Flemington, NJ I’ve ever seen, down 95 through Philly through a slow stretch (Delaware) into the Eastern Shore of Maryland, past the (rather fragrant) “Chicken Country” of Virginia over (and under) the Bay Bridge-Tunnel and eventually into Va Beach.
Having only gotten 4 runs in during the last 2 weeks of training, coupled with the fact that the last time I ran this race (2009) I basically imploded, I didn’t really know what to expect.  My strategy was simple:  Go out easy, reassess (and hopefully speed up) at the 5K, 10K marks, give it whatever was left through 15K and 20K and then finish strong.  Well…..the good news is, I never really felt bad.  The bad news is, I never really felt good either.  I started out just about like I had hoped and go to the 5K split at about the pace I was hoping……but when I started to increase the speed, I could feel that I was laboring more than I should that early…..so I listened and backed it down……at 10K I tried the same and had the same result and then at 15K I was working to keep my current pace.  The last few miles were steady….felt OK, but certainly not strong and then got onto what has become my least favorite finish chute……the Va Beach Boardwalk.  It’s pretty cool to be in the open….the problem is, at least for me, being able to see the finish line from a good 1/2 mile or more away is like seeing a mirage in the desert……eventually I got to the 13 mile mark and saw my sister Teri and family…..and then dug out the last tenth to finish about 5 minutes faster than my 2009 race on virtually the same course a solid slice of redemption (despite being about 6 minutes slower than what I think I’m capable of).  So….all in all…I finished about how I felt, never bad, but never great either……
And so…..on my first’s “Decade Old” day…..with Brett Michael’s band in the queue to play tonight (Stone Temple Pilots and ZZ Top were pretty good on Friday and Saturday respective)…..we are heading out the door for what has become one of my favorite parts of this Pro-Activity family tradition……Mexican & Margaritas!
Overall……you won’t hear any complaints……could I have run faster? Probably.  Could I have done worse? Easily.  Did I need a few days at the beach to decompress?  DEFINITELY.
Red-iculous is still in the future…..but redemption continues to be well underway.
Thanks for reading and more to come.
Mike E.