The last few weeks of training have been suspect…..but I’ve been trying to pop in to BC31 to get some strength work in when I can (which is needed)…..and then a funny thing happened to me….someone asked me a really obvious, but incredibly difficult to answer question  “what motivated you to keep going with this stuff?”……my answer was pretty much an “I don’t really know”…..I think I actually said, “it gets under your skin, you just do”….but then I really started thinking about it.  Why DO people keep going?  What is it that drives me to continue?  Whew, that’s way tougher than it should be…..and I’ve come to realize, it’s a long list…..and there are so many little things that flip a switch “in the moment”…..but what’s the underlying big stuff? What are the big drivers for me? I’m not sure I really know all of the time.  Maybe that’s a good thing….or maybe not.  And so, that innocent little question kick started some soul searching for me this week.


Why do I want to push myself to a limit that can be dark and painful again?  Why do I want to put a bunch more time, money, energy and effort (commodities that I’m always feeling “low” on) into something like this?  Why not just take some time off for a while? 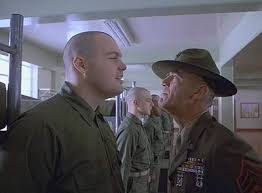 Remember Private Pyle (Lawrence was his actual name) from full metal jacket?  Ok, his demise isn’t so wonderful in the movie and that’s not what I’m getting at here, there’s definitely a level of discomfort watching those scenes…..what I’m getting at is more the idea of “compliance”…..


In the opening scene where they “meet” for the first time, the drill sergeant tells him to choke himself, and he does….sometimes that’s what life feels like…you don’t know why, but you give up looking for the doorway and just keep running into that brick wall over and over…..just because…..last week felt a lot like that at times……just trying to get up that hill……doing what I “should” because I probably should…..it’s a pretty crappy feeling.  Sort of like a twisted version of “duty” or “well I said I would, so now I should”……..tedious drudgery.  I usually find myself feeling this way most when I’m fatigued…..when I haven’t gotten enough rest/recovery……


Many of those unfortunate enough to know me in these times know that my brain starts shutting things down (like my verbal filter and so now you get what I’m feeling sometimes without any consideration on the impact of the statement), my patience gets low and my attitude goes more pessimistic (years ago my sister bought me a shirt with “Grumpy” of the 7 dwarfs on it…..wonder why?).  Unfortunately, this is a state a lot of the people I meet seem to be in ALL the time…..they’re fatigued, they’re run-down and they’re getting beaten down…….kind of a malaise (maybe even a quasi-depression for some), usually accompanied with pain…..yuk!

Then on the other end of the persistence spectrum is one of my favorite movie scenes of all time, when Cool Hand Luke is getting repeatedly knocked down, beaten to a pulp, but keeps getting up…….absolute stubbornness…..unrelenting commitment……..being ALL IN.  Still uncomfortable, and still being driven to face a pretty awful set of circumstances…..but it’s more conscious, more head on. The emotional swing from the thrill of the fight to empathy felt by the other prisoners watching is made obvious……but this example of “drive” is totally different than compliance.  It’s ACTIVE.  He is actively driven, at some deep visceral level……a deep drive to succeed at the task at hand and not give up…..ever……until it’s done.  I love this feeling.  I find myself seeking it out. I think it’s one of the main reasons I find myself willing to take on challenges that other people find hard (or dumb)……by achieving them it validates to me that the important things in life (whatever we personally deem them to be) are worth working for…..even when it’s inconvenient, painful, hard or otherwise not pleasant. I find this so compelling that I try, sometimes without even realizing it, to convince anyone who is willing to listen to me ramble to do something BIG….something totally outside their comfort zone just to get a nibble of what it feels like to be all in and to ultimately GET THERE…..it’s awesome.


I laughed to myself this week when I read Eric’s blog about “my brother gets me all amped up for crazy things….etc”.  It’s true, there I was all last week trying to sell Ironman NYC to anyone who would listen.  Why?  Because, I really believe anyone can do it……and because seeing someone commit and get serious about something that seems impossible even if it takes a few tries….is AWESOME……of course Ironman is a natural fit….their slogan “Anything is Possible” resonates deep with me and there are so many everyday people who have proven it (check out the videos below for a couple in a long list of ordinary people doing extraordinary things via Ironman who ultimately complete the mission).


And so I’m sure you can imagine how totally pumped I am for one of my PACER teammates (Chris B) who has decided to step up to the event in 2012 (somehow we both got our registrations done within the 11 minutes it took for the event to sell out) and for the (at least) 2 others who have verbally committed to 2013…..and more are considering……that by itself is enough to drive me.

I was happy to see a related “re-tweet” this week by Daniel Pink, the author of the book “Drive” (which is one of several that will reside at BaseCamp31 for anyone to peruse over a great sandwich/salad/smoothie at Fuel Good), which I read a year or so ago.  It brought me back to some important concepts… In the book he makes the argument that there are three key things that drive us to perform:  Autonomy, Mastery and Purpose…..


To me, Mission and Purpose are one in the same; and Autonomy is probably why I feel so crappy during moments of “compliance” (just going through the motions is a lot like being controlled……the opposite of any shred of autonomy) and so if Pink is right, that leaves….


MASTERY
This is where the challenge comes in.  To figure out the game…..to keep working the problem until you get a breakthrough…..to ENDURE.  This is the basis of my love-hate relationship with things like puzzles, riddles, the rubick’s cube, etc.  I get sucked-in and keep going until I figure them out….sometimes putting way more important things to the bottom of the list.  Ironman represents the same kind of thing for me……there’s competing….and getting to the starting line at an event like this is a serious commitment and achievement all by itself.


Then there’s finishing….a next jump in mastery.  With so many things that can go wrong, time-cutoffs, and the sheer length of the training period and race, getting across the finish line, whether fast, slow, vertical, horizontal or other, is another jump in mastery.


And then there’s QUALIFYING for the championships in Kona, yet another level of mastery.  No doubt this (the basis for this blog) definitely drives me…..the thrill of the hunt…..the game itself…..or something along those lines.


And so, this week was a baby step back in the right direction.  Had a couple of big work-related-hurdles that we got over (one of which is the approval to open the cafe’ to the public HOORAY) which left me just enough time to do some Red-iculous stuff:

And so I’m making my way up the hill…..less and less like Private Pyle and more and more like a man on a mission to achieve “mastery”……many little hills (and valleys for certain) between now and then, but 60-ish weeks from now, Ironman NYC!


Oh, and BTW, in case you get the urge…..you’re a little late, but there ARE still fund-raising slots available for Ironman NYC……
ANYTHING is possible,
Mike E.


A person on a mission!  Arguably the most famous finish in all of Ironman (1982).


Haven’t seen this in a while?  Worth your 4 minutes!!